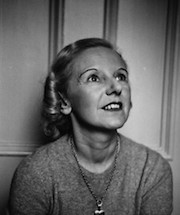 Anna Kavan was born Helen Emily Woods on 10 April 1901. She was an only child whose parents travelled frequently and as an adult she remembered her childhood as lonely and neglected. Her father committed suicide when she was ten years old. In 1920 she married Donald Ferguson and moved with him to Burma where they had a son Bryan. The marriage was not a success and Helen Ferguson left her husband and returned to the UK in 1925, divorcing two years later. During the mid 1920s she lived in London and attended the London Central School of Arts and Crafts. She would continue to paint throughout her life, exhibiting rarely (the image on these webpages is taken from one of her self-portraits). The first evidence of Kavan's heroin use, which would continue intermittently until her death, dates from around this time. In 1928 she married the artist Stuart Edmonds and during their marriage she published six novels under the name Helen Ferguson. Late in 1935 she gave birth to a baby girl who died soon afterwards; she and her husband quickly adopted another baby. This second marriage broke down in 1938 and at around this time Kavan attempted suicide and spent time at private psychiatric clinic Switzerland. She would continue to suffer from bouts of severe depression throughout her life and would attempt suicide many times.

In 1940 Helen Edmonds began to publish under the name of Anna Kavan, one of her own fictional characters, and her writing style was radically altered becoming sparser, darker and more experimental. Her first collection of stories under this name, Asylum Piece, brought her literary acclaim for the first time. By 1941 she had begun to use the name Anna Kavan in her personal life. During the early years of the Second World War she travelled extensively, living for a time in the United States and later in New Zealand with her lover, the pacifist writer Ian Hamilton. When Hamilton was faced with incarceration for refusing to fight late in 1942 she returned to England where she worked for a short time with soldiers suffering from war neurosis at the Mill Hill Emergency Hospital. She went on to work as a secretary at the literary journal Horizon, contributing stories, articles and reviews. In the final years of the war Kavan's divorce from Edmonds was finalized and her son Bryan was killed. During this time she first began to be treated by the German psychiatrist Dr Karl Bluth, with whom she would maintain a close friendship until his death in 1964. She continued to undergo sporadic inpatient treatment for her heroin addiction and severe depression, including visits to the clinic of Swiss existential psychologist Ludwig Binswanger during the late 1940s. In her later years Kavan lived reclusively in London, struggling to be published and suffering from poor health, enjoying a late triumph with her final and best-known novel Ice in 1967. She died of heart failure on 5 Dec 1968 and was cremated at Golders Green crematorium.